Geary County, KS- On December 22, 2022 at 9:42 a.m. Geary County Sheriff’s Deputies responded to Milford Lake in the area of Auld Rd. in reference to a subject who was stranded on the water in a disabled jon boat.  Justin Howe, of Ft. Riley, contacted Dispatch when the motor on the jon boat he was using to retrieve his geese decoys suddenly died.  The boat drifted further away from where Mr. Howe had been hunting and became stuck against the ice before becoming frozen in place. Mr. Howe advised Dispatch at the time of the call he had been in the boat, on the water for approximately 40 minutes.

Once on the water they encountered dense fog which made locating Mr. Howe from the water difficult.  The Marine Unit’s large watercraft began experiencing mechanical issues of its own and the engine went into limp mode.  Just as the Geary County Sheriff’s Office Marine Unit was faced with a decision to return to the boat ramp and seek out an alternative rescue plan, they were able to clear the dense fog and observe Mr. Howe and his jon boat approximately 100 yards away from their location.

The Marine Unit made their way through the ice around Mr. Howe’s jon boat and first attempted to tow Mr. Howe in his jon boat back to shore but were unable to break it free of the ice with their own boat in limp mode.  The Marine unit had to break the ice around the jon boat in order to get close enough for Mr. Howe to board the Geary County Sheriff’s Office boat.  Once Mr. Howe boarded the boat the Marine Unit made their way back to the City of Milford boat ramp.

At 11:55 a.m. the Marine Unit made it back to City of Milford boat ramp where Mr. Howe and the Deputies were screened by Junction City Fire Department EMT’s and released. 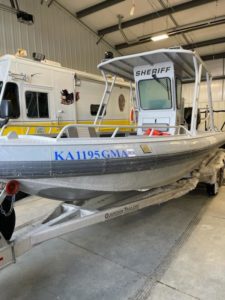 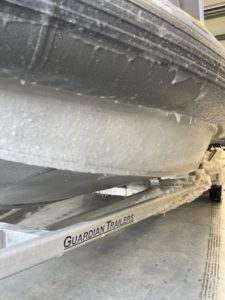 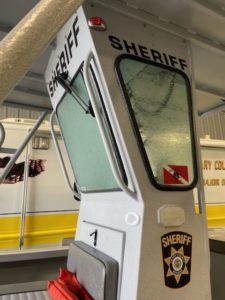 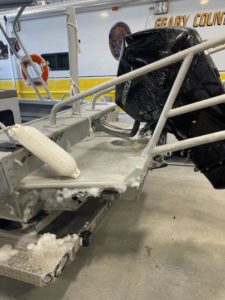 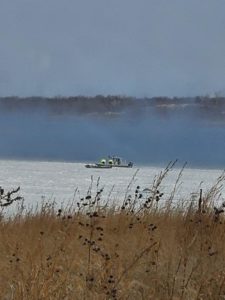