NEWPORT BEACH, Calif., December 6, 2022 — Corn rootworm (CRW) is considered the most damaging and costly pest to corn production in the U.S., causing well over $1 billion in yield losses and control costs each year. Will U.S. corn growers face corn rootworm CRW pressures in 2023 comparable to what they’ve experienced in recent years? This appears to be the case for at least some areas of the Corn Belt based on CRW adult beetle trapping data as reported to the Corn Rootworm Adult Monitoring Network (CRAMN) during the 2022 growing season – and it has obvious ramifications for farmers’ pest control programs in the coming year. As Iowa State University notes, “high adult activity may be concerning and indicate issues for the following growing season.”
CRAMN offers an interactive map representing average CRW adult beetles trapped per day in 2022 Problematic averages are represented in three colors:

What do these numbers mean for farmers and their advisers? According to action thresholds suggested by Extension entomologists at the University of Illinois and Iowa State University:

Based on 2022 data, reported geographies that appear to be especially vulnerable to Western CRW in 2023 (yellow, orange, and red in Map 1) include central and northern Iowa, southern
Minnesota, and areas near the Missouri River in South Dakota, Nebraska, and Kansas. 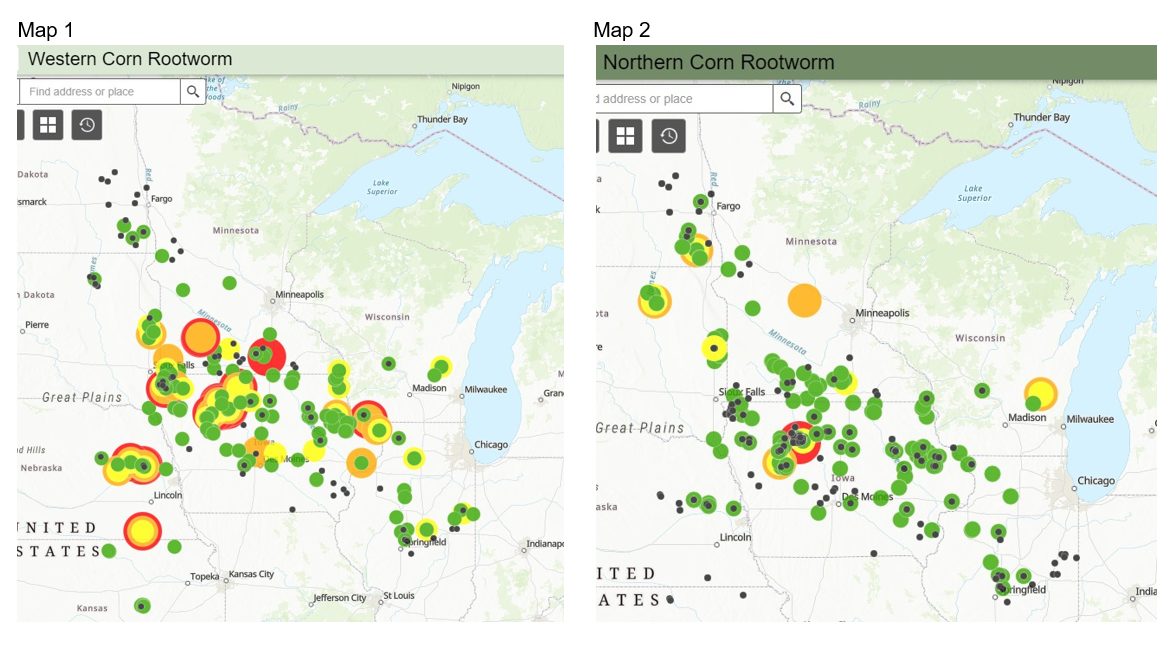 A similar swath of vulnerability seems to exist for Northern CRW in 2023 (yellow, orange, and red in Map 2), though in somewhat more targeted areas: southern Wisconsin, central Minnesota,
eastern areas of North Dakota, South Dakota, and Nebraska along the Missouri River, and spots of northwest Iowa.