Clay Center, KS- The CCCHS Chapter of Youth Leaders in Kansas (YLinK) had a nice surprise when Jesse Hernandez, the State Director of YLinK dropped by their October meeting to present them the YLinK “Hit the Ground Running” state award. 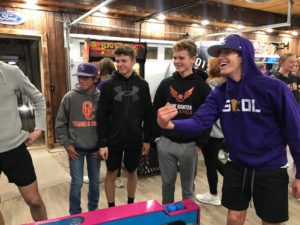 According to Hernandez, the group received the award for being one of the top performing chapters in the state. “I have been most impressed with the energy and creativity demonstrated by the CCCHS Chapter!” stated Hernandez. “They are an outstanding model for all of us across the state!”

Sponsored by the Kansas Department of Aging and Disability Services, the goal of YLinK is to help young leaders reach their full potential by allowing them to plan and implement activities to meet the needs of their community. With a mission statement of “YOU are Stronger than YOU Know!” The CCCHS chapter has targeted drug and alcohol prevention, with an added emphasis on mental health. 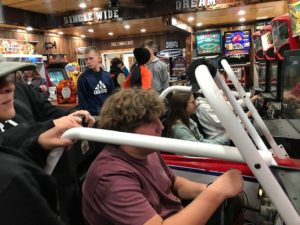 President Reagan Mc Donald has led the group this year as they welcomed their peers back to school with a Positivity Blitz where they distributed wristbands bearing their mission statement to every middle and high school student in Clay County. In September, YLinK hosted the “Lei Off of Drugs and Alcohol Luau” at the Otto Unruh Stadium. Then on October 20th, 82 members of the group met at the home of Zach and Tiffany Anderson to enjoy their Fall Festival  “Anderson Arcade and Movie Theater.” In November the group plans to host a Mental Health Awareness Day at CCCHS.

Supported by the Clay Counts Coalition and the Clay County Health Department, the group seeks to provide positive alternative activities for kids that do not include drugs and alcohol. “We are striving to give our kids something else to do besides booze, cruise, and use in Clay County,” stated chapter sponsor Lori Martin. “It is such a joy to watch the kids identify the needs within their peer group and then work to address those challenges. My job is to stand back to support them as they make good things happen in our community!”

To learn how you can support YLink or host an event contact Lori Martin at lorileemartin@gmail.com.