“For over two years we have been investigating the origins of COVID-19 and our efforts have hit many roadblocks from Dr. Fauci. Frankly, it feels like a massive cover-up and we can’t get the answers we deserve,” said Senator Marshall. “As a physician, I think we always need to know what, where, how, and perhaps why whenever any infectious disease outbreak occurs. Unfortunately, only complete access to all the data and samples will determine the truth. If bad actors continue to obfuscate and prevent this investigation from happening, we can’t take no for an answer.”

“I’m convinced Anthony Fauci and Francis Collins knew from the beginning that COVID-19 most likely came from a lab, and they took concerted steps to make sure our country didn’t get that information,” said Representative Jim Jordan. “Instead of owning up to the truth, Fauci and others in the medical community tried to convince us that the virus went from a bat to pangolin to a hippopotamus to Joe Rogan.”

Last week at a hearing when Senator Marshall asked Dr. Fauci if he would stop using U.S. taxpayer dollars to fund Chinese Communist Party research projects – such as EcoHealth Alliance’s activities at the Wuhan Institute of Virology – Dr. Fauci admitted his agency does not have any plans to do so. You may click HERE or on the image below to watch Senator Marshall’s full exchange with Dr. Fauci. 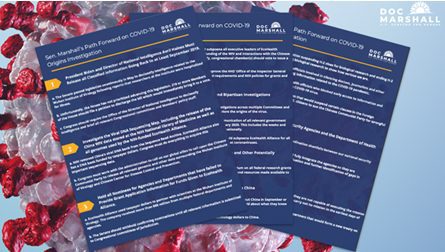